We leave Tolbas quieter than how we arrived and climb to 2600m on the mountain pass to Khovd where it is -6C and the road is icy. Navigation is difficult and you just have to look at the bearing from google maps/maps.me. Surprisingly we find a cafe in the middle of nowhere and eat the freshest mantu (dumpling filled with meat). It doesn’t get any fresher as we watched him kill the goat.

Back on the ‘road’ we drive parallel to the actual road but can’t get on and the tracks dive left, right and centre.

Arriving in Khovd we find a proper mechanic with a pit and proceed to get the exhaust welded (again!). Unfortunately we find a radiator leak. Fortunately we have radiator sealant but it’s frozen solid. A little blow torching later and it’s good to go. Sorts the problem- love you K-SEAL!

One thing to say about Mongolia though is that the food is delicious, we had prepared ourselves for disgusting meaty dishes. Alas no, it’s a mixture of Chinese, sizzling meat and surprisingly a lot of vegetables.

The next day we are back in the garage with the back of the exhaust loose- but a quick tightening of the bolt and we are off. Unfortunately our compadre Santiago’s bike frame has cracked so they cut it out, insert a tube and reweld.

That night we bump into some jovially drunk Mongolians who we had seen round town all day. Turns out Agee is a national wrestling champion, Bayaraa is an international taekwondo champion and Tubalo is a national policeman. A few bottles of vodka, beer and I have no idea what happened. Some sort of after party in the hotel, nearly getting mugged by a taxi driver (Saved by Tubalo). 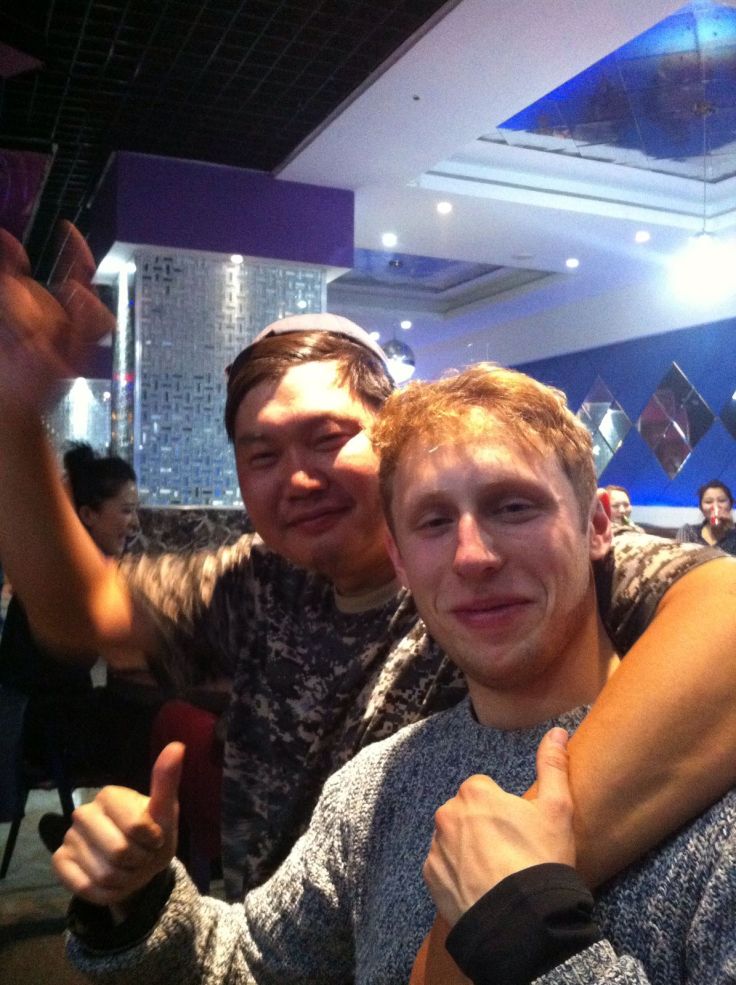 So slightly (very) hungover we made our way to Altai. The road was perfect Tarmac. Very boring drive so we picked up a Mongolian hitch hiker but only for 20 miles. Again as we approach Altai the exhaust flares up so we find a garage for (yet more) welding. Very cheap though (Max. 2usd a pop)

The next day we aim for Bayankhongor, bracing ourselves for 300/400km of dirt track and possibly a river crossing. The first 100km is great…but you guessed it…the exhaust comes off again-this time completely fractured. So we hold it back on with wire and continue, our CRV sounding like some sort of turbo-charged rally car. God knows what we would’ve done if we met a river.

We find petrol along the track at Bumbugur (snigger) and continue through sand, dirt and meandering tracks to the first river crossing. Saved by a bridge we proceed to the second bit…also a bridge. The car is a lot of fun on the sand-it’s like drifting. But Santiago’s bike takes a battering and he loses a tail light and his number plate.

It gets dark and we end up sandwiched between the north and south route. Progress grinds to a halt as we try to find the tracks. Maps.me comes to the rescue with a little restaurant icon 7 miles up. This takes us nearly half an hour but a little yurt motel is just what we needed. It was a special moment, seemingly in the middle of nowhere, surrounded by the steppe, silence and more stars than you could ever hope to see back in England.

Unfortunately waking in a yurt is horrid as it’s freezing. This is even worse when 2 blokes decide to wake you at 4am to tell you your exhaust has come loose, as if the last few hundred kilometres of the car roaring gave no indication that something was wrong. We burn anything in sight to warm the yurt in the morning. After bump starting Santiago’s bike again we continue to Arvaikheer (all Tarmac after Bayankhongor). Here we finally sort the exhaust by taking it off to weld.

So this blog entry is more about what broke than Mongolia itself. Well that’s all that happened. Yes the mountains, lakes and culture are beautiful, and your thoughts can get lost as you stare into the steppe, but the roads are awful. Leaving Arvaikheer we again suffered terribly on a potholed Tarmac road. Santiago crashed into one and his wheel exploded. The bike ended up on a flat bed truck to Ulaanbataar while we continued ahead. The road improved and we arrived into Ulaanbataar for Oasis hostel after 2 hours of horrendous traffic.